LAKE GEORGE, N.Y. (NEWS10) – Whether you’re visiting on vacation or live right down the road, the lake is an attractive spot anytime in the summer, and perhaps never more so than during a heat wave like the one that’s hit early this week.

Temperatures hit 90 on Monday, followed up by a hazy 92 on Tuesday before some rain set to come and cool things down through the rest of the week.

How the lake keeps its cool

The Lake George Association and The FUND for Lake George have spent decades tracking how the lake does what it does; how its water stays as clear as it has, and how temperature is regulated. 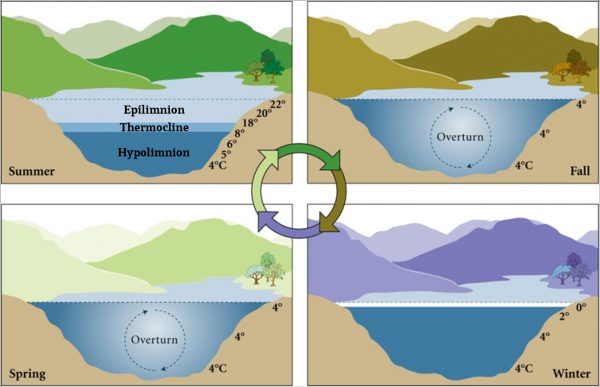 In a typical June, upper layers of water get heated up to anywhere from 70-80 degrees Fahrenheit, shaking off the last of any surface cold from the winter and spring.

That upper layer is separated from lower ones by a thermocline, a temperature barrier between where temperatures will quickly warm and where they’ll stay colder. Through the summer, Lake George’s thermocline is at around 32.8 feet, and will then change as the lake cools off in the fall.

Fall and spring are both periods when the entirety of a body of water gets mixed around. As climate change causes those temperatures to get warmer year-round, adverse effects can follow.

The Adirondack Council, another steward group that works across the whole Adirondack Park, writes that coldwater species are at risk if those summers get hotter. They point to the vulnerability of fish like brook and lake trout, which thrive in colder temperatures, especially during spawning and mating seasons.

When it comes, rain this week could have effects on the lake that environmental groups and the EPA say are tied to climate change, and could lead to some dangerous growth in the water.

A 2013 study by the EPA links changing rainfall patterns to growth of harmful algal blooms (HABs), growths of potentially toxic algae in water bodies that can threaten the health of swimmers and aquatic life alike.

Blooms feed on nutrient runoff into water bodies, which can come from sources like aging septic systems and salt and grime on roadways, both topics that the FUND and other groups around the lake have worked to combat in recent years.

Some of those nutrients can also come when rain starts to fall, just like it’s set to later this week.

The report says that the link between climate change and more concentrated bursts of intense rainfall can result in the transfer of more nutrients into water bodies, where they will stay for a longer period of time than usual. That gives blooms plenty to feed on.

Despite work to combat them, the lake saw its first harmful algal bloom last year, and has seen numerous e.coli-related incidents related to septic runoff in recent years.

Million Dollar Beach was closed for a weekend in early June due to high E. coli levels, which the New York DEC said at the time was likely related to recent heavy rainfall. The beach has seen numerous other closures due to similar E. coli level issues.

That closure did not result in the discovery of an algal bloom.

The report highlights other ways that a heat wave like this can impact the water in a place like Lake George.

One issue is salinity, which increases as the amount of water in water bodies declines. That can be a symptom of increasing summer drought.

Blooms don’t feed on that salt, but react to an overabundance of it in ways that can cause the release of harmful toxins into the water, as the salt puts stress on bloom cells.

Regardless of how salty the water, all algae species also feed on carbon dioxide. An increase in Co2 caused by climate change causes a buildup of carbon dioxide in water bodies, meaning more for blooms to feed on. Once grown large enough, blooms then rise to the surface, where their access only grows.

BUFFALO, N.Y. (WIVB) -- With 99 new cases of COVID-19 on Thursday, Erie County now has a "substantial" risk of transmission, according to CDC measurements.

Police say they're not sure if the boy was with family, on a school trip or by himself at the Manhattan structure, a popular attraction since opening at Hudson Yards in 2019. He jumped on Thursday afternoon at around 1 p.m., they said.

Weird cheesecake facts to get through National Cheesecake Day

NEW YORK (WWTI) — July 30 is National Cheesecake Day, and even those who spend every weekend at the Cheesecake Factory might not even know these weird facts about the beloved dessert from the Foodbeast.

Is needle fear keeping folks from getting vaccinated for COVID?

Did you know? List of ‘official’ New York things

Aunt arrested, charged after the bodies of two children found during traffic stop

Can employers mandate workers get vaccinated? Hear from a NY attorney

Looking for an incentive to get the COVID-19 vaccine? This app is here to help